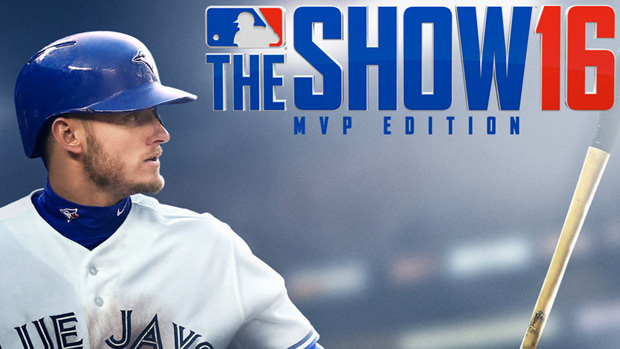 
Take me out to the ball game

The presentation, which is already known to be best in show, is of course world class again this year. The player models and animations are beginning to hit that uncanny valley and I anticipate with the eventual penetration of VR, we'll be on the field soon.

The most noticeable change is how the helmets fall off the baserunners as they slide. Last year, when a helmet would fly off, it would soar through the air like a bag of rocks. It looked wrong and annoyed me. This year, the helmets have a bounce and weight that feels like physics are at play. I know I'm nitpicking, but that's how good The Show is. You have to dig deep to find the errors. 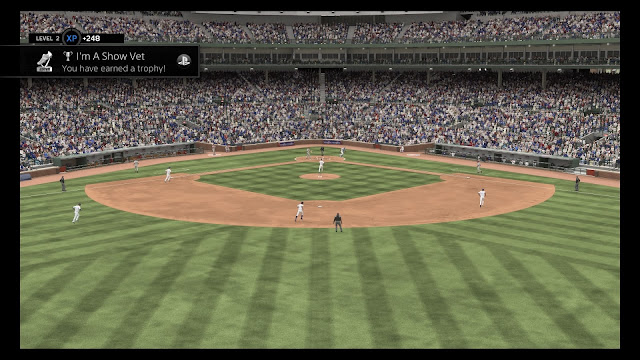 Take me out with the crowd

The attention to detail is what separates The Show from other sports games. That and the fact that no one else can make a console MLB game. Of course the crowds are more diverse than ever. With more character models and variations in their clothing, The Show is proving there is still more ground to break in the atmosphere of a sports game. Sounds from the crowd make you feel like you're at the ballpark ready to inhale your second hot dog and third beer. The stadiums have been given a facelift, and although you may not be able to pinpoint the difference, it's there.


Buy me some peanuts and cracker jacks

This year's version, like many of the recent past, recommends you buy stubs and spend those stubs on either pumping up your stats in the Road to the Show mode or buy card packs in Diamond Dynasty. I for one, would never cheat my experience by paying to win in the single player, but opening packs of virtual baseball cards is another thing. I use to be a card collector, so opening packs of baseball cards and getting your favorite players is intoxicating. The adrenaline of pulling a gold player is what dreams are made of!
I can see why some people would just play Diamond Dynasty. The marketplace, where you can buy and sell cards, is like playing the stock market. Trying to sell when the price is high, or steal a good player when the price is low, is a game unto itself. Some may just want to spend all their time collecting cards. 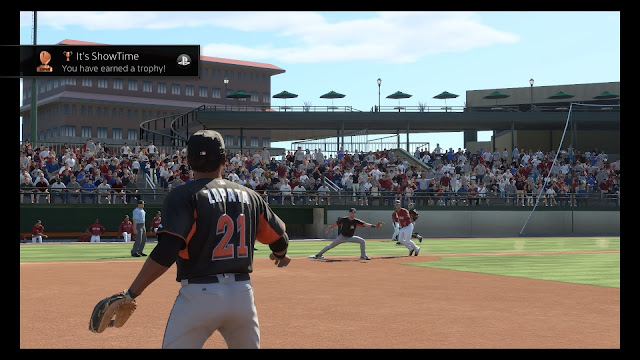 I don't care if I never get back

Modes, modes and more modes. The Show has so much to offer. If you like franchise mode, do it. If you are more into fantasy baseball, get on that Diamond Dynasty, which has finally added the ability to play against friends. Within DD, there are new ways to play. A conquest mode, which is best described in the tweet below, is one of those new ways to play.

San Diego Studios has done a great job with The Show. It's all about small additions and refinement. They don't reinvent the wheel every year, they just make a better one. I was a little sad to hear there would be no PS Vita version this year, but sometimes it's time to cut the dead weight. I was one of the few that would play my franchise games on the Vita and then upload them to the PS4 version. It was a nice feature but not a big loss.

If they don't win it's a shame

I won't say the online is broken, because it's been this way for years. The first few days there were widespread online connectivity issues that prevented me from playing my online franchise games. Since it needed to have a connection to the servers, I couldn't even get the the franchise menu. This is either a great sign that so many people purchased the game or The Show servers are crap (this is what it probably is). I have yet to play an online game but my expectations are low. The Show's online experience isn't the greatest, although last year was serviceable. It's the one glaring flaw that has yet to be addressed in a meaningful manner. I hope that when Bourne and I play our TPSS World Series that I can repeat as the best baseballer in the TPSS community. Fingers crossed the servers hold up!


For it's one, two, three strikes, you're out

Either I'm getting older and worse at video games or the hitting on All-Star difficulty is actually hard this year. The first two games I played I couldn't score a run because I couldn't hit the ball. I'm getting better, but I'm not past the frustration stage. If a small animal would have been sitting by me during my first few games I probably would have punched it.

I swing way too much but I'm working on it. There is a patience that is required that I have yet to master, but that's a good thing. Hopefully by the time I'm done with my first Online Franchise I'll be proficient and not have a .185 BA. 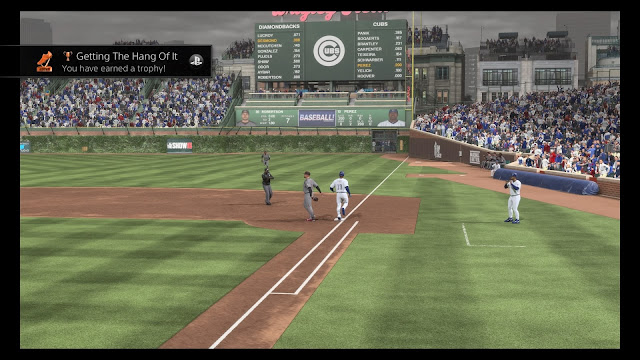 At the old ball game

MLB The Show 16 is another great release of the only baseball game on the market that matters. You might think they wouldn't innovate like those guys doing that Madden game, but that's not the case at all. If your a baseball fan, this is a must buy, and if you've been away for while, it's a perfect time to get back into the game. 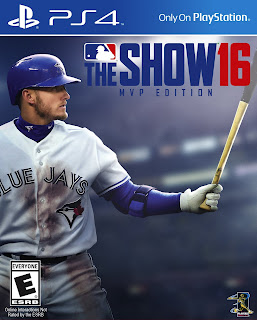