Pixel Ripped 1995 takes the player on a journey to a magical time, being a kid in the year 1995. This game within a game has you step into the shoes of David, a young boy who just wants to stay home and play video games. The games are played on a CRT within the virtual space, as various distractions go on around you. Most notably is David’s mom, who is constantly trying to get David to put away the video games and play outside. This creates moments where you must put down the controller and create a real-world distraction to allow you to keep progressing in the game. 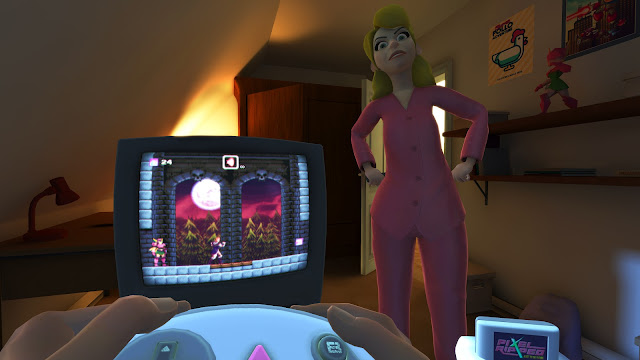 The games David plays in Pixel Ripped 1995 are heavily inspired by the most popular games of the era. You can expect to play similar games to Sonic, Zelda, Crash Bandicoot, and a bunch more. The games span the 16-bit era and touch a bit on the 32-bit era, but Pixel Ripped 1995 is not just a childhood simulator, there is an overarching narrative to the game. 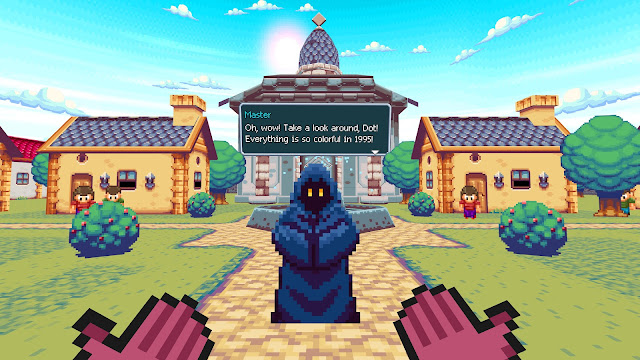 Within the video game world, there is a female protagonist named Dot, who is fighting a villain who threatens to destroy the video game world. This is all explained within the first few minutes, for those who did not play the predecessor, Pixel Ripped 1989. Dot recruits David, unbeknownst to him, as he is the highest-ranking gamer in the world. You play as David, who plays as Dot, in multiple games spanning several genres. The games being played are constantly being changed, including a section where you alternate between two games at the same time. So, while none of the games are anything to write home about, the constant shift in playstyle keeps the gameplay refreshing. On top of this, you have the real world setting outside of the game playing a part in your ability to complete a stage. These outside interferences are creative, and at times result in the video game world spilling into the real world and vice versa.
The player will step into the shoes of Dot at times, although this is mostly reserved for cutscenes, or non-playable sections. While a minor part of the game, I love the scenery in these sections. Playing in David’s living room during the day and David’s room at night were also memorable locations. This game takes full advantage of the VR technology to create immersive environments. I found myself smiling as David’s mom was yelling at David for playing so many video games. It almost brought a tear to my eye as I reminisced about my own childhood. The only thing that could make this more relatable is if David’s parents started fighting. 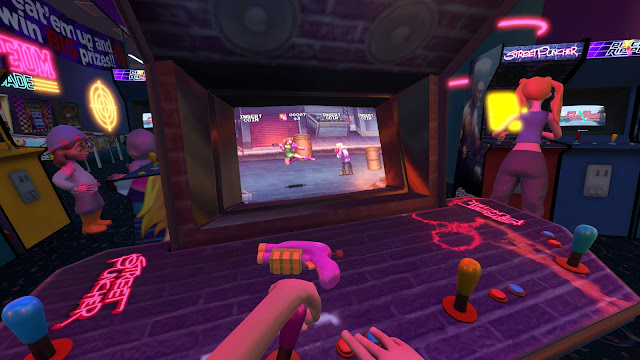 Pixel Ripped 1995 is a memorable experience, and a heartwarming tale. It will be especially impactful for anyone who grew up in the era that the game sets to replicate. It is one of the most creative uses of PSVR and I hope to see the series continue into the next era of games.

July 15, 2021
Just Die Already is a game where you choose an old person to play as and cause mayhem around a sandbox area. The best way to describe it is, goat simulator but replace the goat with a boomer. That sentence will be the best rundown I can give for those who have played goat simulator. Otherwise read on to get an idea whether or not this game is for you.    Once you select one of four old people to play as. Your character is free to roam an open area with loose goals and objectives. There are puzzles and items you can interact with to cause crazy stuff to happen, and unlock new areas and objectives. Everything feels optional past the 5 minute point. Once you’re dumped into the world, you’re on your own. The exploration is one of the strengths of the game. It feels refreshing to have no tutorials or a large arrow pointing you to your next objective.  Another strength of the game is in its humor. This can also be a weakness depending on your brand of humor. Slapstick comedy is the central t
Post a Comment
Read more