Disaster Report 4 is a game with a fascinating history, similar to Duke Nukem Forever, Half Life 3, or whatever Final Fantasy Versus XIII, but without all the hype. The Disaster Report series has been around since 2002 but has not had a title released since 2009. Disaster Report 4 was first announced for PS3 release in 2011. As one of the few Disaster Report fans, I closely followed any news for such an obscure title only covered by niche sites such as this one. The game was cancelled after several release dates were pushed back and ultimately the biggest earthquake ever recorded, at the time, hit Japan. Disaster Report hit close to home with its earthquake theme, thus it was cancelled altogether. Fast forward almost a decade later and we finally get the much-anticipated 4 entry in this weird survival horror natural disaster Japanese series. Was it worth the wait? 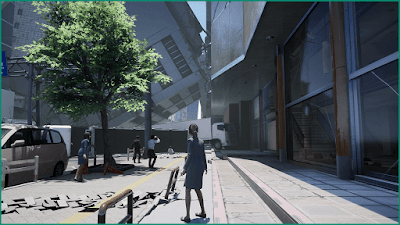 Disaster Report 4 feels like a throwback to where it originates from, the early 2000’s. This can be a good or bad thing. Games like this don’t exist anymore; it’s rare to see a niche $60 game in the market. We live in a word of budget indie games or AAA titles. It’s refreshing to have an unpolished experience that’s not meant to necessarily be memorable or tug at your heart strings. And, unpolished it is; the framerate issues will show themselves early and often. The world seems a little empty for its size. I often found myself backtracking around every corner and talking to every NPC in the hopes of finding some good loot. 99% of the time, you won’t get anything from exploring, but sometimes you’ll get an essential item to advance the story. This can be frustrating if you need to do such a task in a certain order. I more than once found myself talking to everybody and having the last person trigger me having to talk to somebody else, so I backtrack talk to everyone again. The dialogue you get from these NPC's isn’t going to win any writing awards. You will run into characters such as “disgruntled man” who has this to say, “I’m disgruntled.” While charming in its own way, it does not make me want to interact with these NPC's, who contribute to the world feeling so empty.


Now let's talk about the story. The premise is similar to every other game in the series. You’re living your everyday Japanese life, when an earthquake hits, everything is devastated, and go! Along the way you will meet characters who will play out storylines, some of them intertwined. You are given the freedom of dialogue options and moral choices to help flesh out the character you want to be. Rather than the good, evil, neutral options that most games would give you, Disaster Report, on average, gives you seven options to choose from. These choices help define a more complex character, but every decision boils down to moral and immoral points being rewarded. Unfortunately, your choices don’t have much of an impact on the story or characters. Any time I was asked for a favor, whether small or life saving, I asked for financial compensation, because I thought it would be funny. The result was a nasty look and some immoral points, and then the game progresses as it would no matter which choice I made. Characters treat me as a hero or ally, even after I tried to sacrifice them to save myself. The exception is a late game choice that determines which ending you get.

Although the choices may not matter ultimately, they can result in fun interactions, and that’s the strength of Disaster Report 4. There are fun and funny moments in this game. Some of the characters you meet along the way are wacky and lead to funny interactions. Some of the bugginess and jank of the game will also lead to some laughs. It’s a similar enjoyment to that of watching a B-Horror film. Yes it’s bad, but it’s almost so bad, it’s good. The game does take some serious and dark twists in certain story lines. It comes out of left field for a game that will let you dress up as a power ranger type character while these serious scenes play out. Either way, it’s hard to take anything seriously due to the unrealistic graphics and effects.

Ultimately, Disaster Report 4 was an enjoyable experience. If you’re a fan of the weird PS2 era Japanese games such as: Disaster Report, Mister Mosquito, Chulip, Gitaroo Man, etc., this will feel like a nostalgic trip back to a simpler time. Otherwise, it’s hard to recommend Disaster Report 4: Summer Memories.

Arcade Paradise is part arcade manager sim and part arcade game compilation. You play as Ashley, a girl tasked with taking over her family's laundromat. Ashley sees laundromats as a relic of the past and the big money is in investing in an arcade, obviously this is a work of fiction. Anyways, her old man just doesn’t get it and is unsupportive and won't even hear her out; parents not believing in their kids and being proven wrong seems to be a common trope in video games today. Thus, you set off on your journey to win your father's love through capitalism! Club Sega wasn’t built in a day, that’s the first example of a famous arcade I could think of. Before you can start building your Arcade Paradise ™ , you must run the laundromat to build up your capital. This consists of washing and drying laundry loads, picking up trash, cleaning the toilet, and removing stray pieces of chewing gum. This nets you good money compared to a couple of arcade machines in the back room. Da
Read more